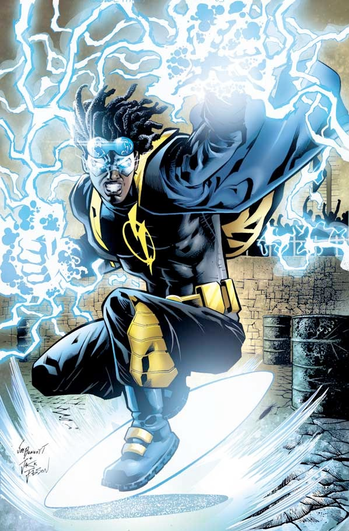 Static is a comic book following an original character from DC Comics' Milestone Comics imprint, created by Dwayne McDuffie and John Paul Leon. Static #1 was published in June 1993. The series lasted for 45 issues, from June, 1993 to March, 1997.

The series follows high school student Virgil Ovid Hawkins who gains a variety of electromagnetic powers when doused with an experimental chemical during a gang war he was caught up in. He uses his developed powers to combat the crime infesting his city. Much of the series centers around the ongoing gang activities while he also juggles typical adolescent problems.

The comic was later adapted to the TV series Static Shock, with some bowdlerisation, and revived as a DC Comics series in 2011's New 52 event, also under the name Static Shock, which was canceled after eight issues. Crossing over from his own show, Static guested on Justice League Unlimited. He also is a recurring character in the second, third and fourth seasons of Young Justice. A live action series

, directed by Reginald Hudlin, is currently in the works.

Not to be confused with either of the two Marvel Comics characters of the same name, both part of different X-Men continuities.