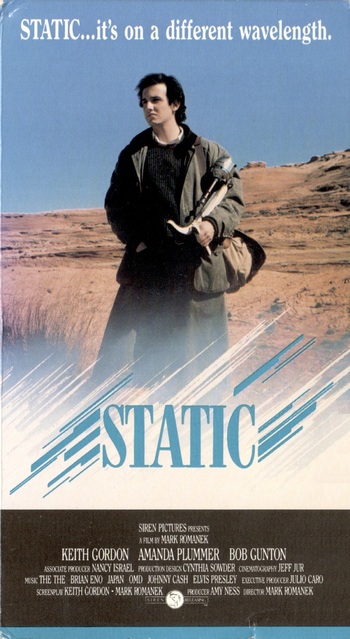 The 1985 directorial debut of One Hour Photo creator Mark Romanek, Static is a Black Comedy with a Downer Ending and a cast of characters who seem to inhabit a slightly different reality.

Julia Purcell (Amanda Plummer) is a rising star New Wave musician who has gotten stuck on the way up. Having grown dissatisfied with her career and life; she abandons both to revist her hometown roots during the Christmas holiday to recapture... something. On arrival, she hooks up with old flame Ernie Blick (Keith Gordon), still living there after the death of his parents years earlier; along with his only remaining family — his uncle Frank, a nutjob street preacher and survivalist, Frank's cheerfully demented Vietnamese wife Li, and their hyperactive kids North and South. Ernie is working as a quality-control inspector in the town's plastic crucifix factory; but has a top secret personal project that has kept his friends and family in suspense for months. Ernie has invented a machine that "Will make people happy, and not sad". A machine that can see Heaven.

But when the big unveiling comes, there's a problem. No one else can see what he sees. Refusing to believe that he's the only one who can see Heaven, he commits increasingly desperate actions to get attention for his amazing invention; culminating in the hijacking of a bus of senior citizens.

Predating the Indie film boom, Static is clearly an early example of the style that would become standard for the genre. Strange characters, oddball situations, warped psychology, low budget, dramatic imagery, and a Twist Ending intended to shock the audience.

The style is very reminiscent of David Lynch, in both in the setting, a small seemingly-peaceful Bible-belt town, and the unusual characters. Romanek's use of dramatic colour shifts enhances the intensity of the mood of many scenes — cool, soft blues underscore the peacefulness of Ernie's inventing room, while bright reds and oranges highlight his increasingly agitated state when his machine fails to impress.