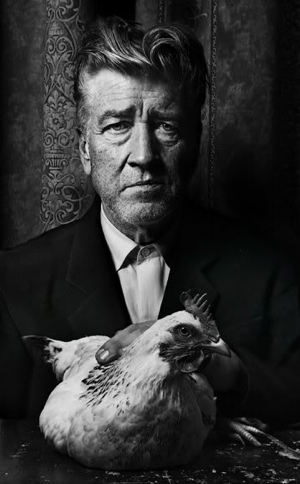 David Lynch has a chicken.
Your argument is still valid, though.
"It makes me uncomfortable to talk about meanings and things. It's better not to know so much about what things mean. Because the meaning, it's a very personal thing, and the meaning for me is different than the meaning for somebody else."
— David Lynch on most of his movies
Advertisement:

David Keith Lynch (born January 20, 1946 in Missoula, Montana) is a filmmaker, artist, musician, writer and occasional actor. He is widely deemed one of the most acclaimed and influential filmmakers of his time for his idiosyncratic audiovisual style, as well as arguably the most popular director regularly associated with surrealism.

Like Alfred Hitchcock, Akira Kurosawa and Kathryn Bigelow, Lynch was originally trained as a painter. Motivated by a desire to see his paintings in motion, he went into filmmaking in the late 1960s. His short "Six Men Getting Sick" won a cash prize; from this point forward, he would be a professional filmmaker.

If you want to appreciate Lynch's craft, traditional methods of interpretation aren't gonna cut it. Lynch resists any sort of attempts at rational analysis and is really concerned with being in gnostic control of his stories. Any interview question about the meaning of his works gets shut down instantly. If he wanted the audience to pop-psychoanalyze his creations, he would open the floor up for discussion, but he doesn't. The point of his utilization of dream logic is that the metaphorical, figurative, or thematic connection between things is always arbitrary, and that this can never be taken too lightly.

His daughter, Jennifer Chambers Lynch, is also a film director. Her best-known work, and certainly most infamous, is 1993's Boxing Helena. And no, it doesn't involve prize fighting (though Julian Sands gulping raw egg smoothies might have spiced it up a bit).

Since May 11th, 2020, he's been posting daily videos of himself reading the weather reports for LA and picking numbered balls from a jar on his YouTube channel.

Yes, every single day. And it has a dedicated fanbase (he'd originally did them for a few weeks in 2009, but it didn't catch on. The COVID-19 Pandemic lockdowns greatly helped the second attempt).

You can now vote for your favourite Lynch film here!

He has also made many short films, television commercials and music videos.

Tropes in Mr. Lynch's movies and life include: