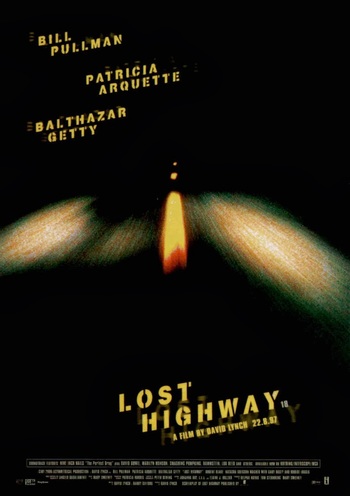 Fred Madison (Bill Pullman) is a jazz saxophonist married to Renee Madison (Patricia Arquette). Fred wakes up one morning to answer the door intercom, where a mysterious voice gives him a message: "Dick Laurent is dead." After this, Fred and Renee begin to receive a series of videotapes on their doorstep, showing the interior of their house and even images of them asleep. Fred also begins to suspect that Renee may be cheating on him, and begins experiencing nightmares in which he wakes up next to his wife, only to discover she is somebody completely different.

After a terrifying encounter with a Mystery Man (Robert Blake) at a party, Fred receives a final video which shows him killing Renee. Fred doesn't remember himself committing the murder, but the police appear to arrest him for the crime. In a blur, he is convicted and sentenced to death. Locked away in his cell, he awaits his execution...

Pete Dayton (Balthazar Getty) is a young mechanic who wakes up in a death row prison cell despite having committed no crime. Pete is released into his parents' care, while being trailed by two detectives who want to know how he came to end up in Fred Madison's cell. On returning to work at his garage, Pete crosses paths with the volatile gangster Mr. Eddy (Robert Loggia) and his beautiful mistress Alice Wakefied (Patricia Arquette). Pete embarks on an affair with Alice, who fears being discovered by Mr. Eddy, who isn't actually Mr. Eddy at all but a porn producer called Dick Laurent who...

Released in 1997, Lost Highway is a neo-noir film co-written and directed by David Lynch. While its outre qualities polarized audiences and critics alike upon release, later reevaluation deemed it not only a key Lynch work, but a surprisingly influential film, as its twisting, identity-centered plot was echoed by films such as Fight Club, Donnie Darko, and Memento. Lynch would further develop the theme in Mulholland Dr. and Inland Empire, this film's Spiritual Successors; both films alongside Lost Highway take place in Los Angeles.

The best way to watch this film is with an open mind, preferably in a well-lit room with the phone unplugged.

Not to be confused with the classic Hank Williams song, or with Bon Jovi's country album of the same name.