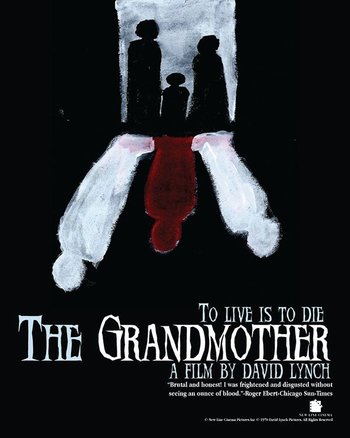 The Grandmother is a 33-minute short film from 1970 directed by a 24-year-old David Lynch.

It uses a mix of animation and live-action for the sort of surrealistic Mind Screw horror that would be typical of Lynch's entire career. Two of what only can be described as "people-seeds" sprout, springing from the ground as full-grown humans, a man and a woman. They sort of bounce around for a while, bumping into each other in what may be a metaphor for sexual intercourse, until a third person-seed sprouts, creating a boy of about ten.

The three people live as a family in a surreal home where various bits of furniture sit in rooms that are painted pitch-black. The parents are abusive. When the boy wets his bed the father screams at him and shoves his face in the yellow puddles the boy leaves in his bed. His mother makes a gesture as if she would hug him, but becomes physically abusive as well when the boy recoils from an embrace.

Desperate for some companionship, the boy takes something that looks like a rock or a potato from a bag labeled "SEEDS". He dumps a pile of dirt on a bed and puts the person-seed in it. From the bed grows a grotesque tree-like thing, that eventually births a slimy, dirty grandmother.

Made by Lynch for the American Film Institute on a budget of $7200. The AFI gave him a grant on the basis of two micro-short films he'd made as a student.