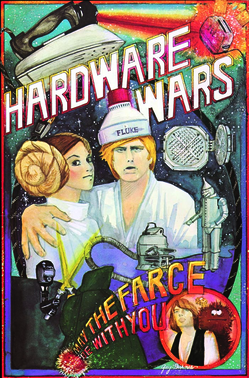 Hardware Wars is a 1978 Fan Film written and directed by Ernie Fosselius. It is a Short Film parody of A New Hope, expressed as a movie trailer. It's not just a low budget, straightforward spoof, though — the underlying gimmick is that all of the spaceships and even some of the characters have been replaced by household appliances and tools: the R2D2 Expy is a canister vacuum, the Millennium Falcon is represented by a steam iron, Star Destroyers are flying toasters and hand-cranked egg beaters, even Stormtroopers have turned into "Steam Troopers", and more. The silliness simply must be seen to be believed.

George Lucas is apparently on record saying that Hardware Wars is his favorite Star Wars parody. The Last Jedi director Rian Johnson liked it enough to slip an homage into the film.

All scenes depicting violence towards animals were deleted from the film. Also, some animals tasted better than others. People with special dietary needs should consult with a physician before digesting the flesh of once-living things.