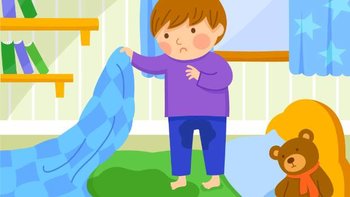 Don't feel bad about it, little boy. It's probably your antidiuretic hormones.
I guess I should've listened to what my mother said
"Now don't you drink all that fruit juice right before you go to bed!"
I had a little accident, no need to call the president
Can't we just get over it instead?
—Generation O!, "Damp Sheets"
Advertisement:

This trope is whenever a character has a Potty Failure in bed. Most of the time, this is urinary, but sometimes it's period stains or Nocturnal Emission instead.

Most of the time if a character wets the bed (the most common form of the trope), it will be Played for Laughs, as bed-wetting is associated with children, so in many works there will be amusing moments with the bed-wetter trying to hide the accident, and, if they are found out, the other characters teasing them about being childish. If the character had a reputation for being tough, cool, or in any other way enviable, the character may worry they have lost their reputation, and if it's a children's show, the character in question will often be a child who wants to be more grown-up and their family either sets up An Aesop about how wetting the bed "can happen to anyone" or helps the child overcome the bedwetting.

Leaking menstrual blood in bed is slightly less embarrassing, but can still be embarrassing due to its stigma, and how difficult it would be to clean it up. Nocturnal Emission may be embarrassing or not, depending on how lusty or un-lusty the character is and/or expected to be. If this trope happens to be played for drama, expect Abusive Parents to follow.

A subtrope of Potty Failure. May be the result of a Warm Water Whiz prank. Supertrope to Wet Dream.

Grover and Elmo discuss this trope in song, saying that bedwetting is normal for little kids.

Grover and Elmo discuss this trope in song, saying that bedwetting is normal for little kids.