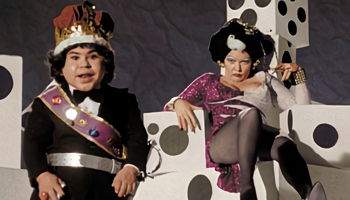 If you see a little person in a film, or TV show or comic book, chances are whatever you're watching resembles a Disney Acid Sequence.

Little people rarely just appear in fiction. They tend to show up to make sure the audience understands that a story is surreal. More often than not, they dress in overly colorful clothes, or talk in a particularly strange way, or just stare at the other characters to symbolize that someone's having a nightmare. Sometimes, they're magical.

Note that this trope applies only when a little person is shown or perceived to be notably different from the "normal" reality. (Big Figure in Watchmen, for example, doesn't count.)

Not to be confused with that other kind of dwarf. Remember: dwarves are fantasy creatures, dwarfs are short humans, and nowadays the polite term for the latter is "little people."

Compare and contrast with Depraved Dwarf. For another physical condition that's often treated as an oddity, see Albinos Are Freaks.