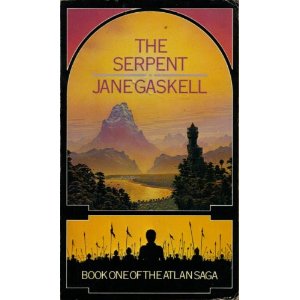 Cija—Princess of Atlantis—fights for her life in a savage world of lust and violence[.]

—the blurb on the Paperback Library edition of Atlan

Atlan (also known as The Atlan Saga, originally published in the 1960s through the 1970s) is a series of British fantasy novels written by Jane Gaskell. The books take place in a prehistoric civilization—"before the continents had changed," state some of the back cover descriptions. Gaskell's intent seems to have been to combine every prehistoric myth into one lengthy narrative. The primary thesis of the novels is that they tell the story of how the human race really came to be. For instance, Gaskell explains in the introduction to the first novel that the legendary Mesoamerican country Aztlan is synonymous with the lost continent of Atlantis (hence the title of the series), among other alternative historical tidbits.

Princess Cija (pronounced "key-a"), the heroine, begins as a naive seventeen-year-old kept sheltered in her royal tower. Her mother, known only as the Dictatress, has maintained her daughter's ignorance because of a prophecy that Cija would destroy the kingdom if she ever left her tower. As a result, Cija believes that the male half of the human race has gone extinct, that female humans reproduce through laying eggs, and that there is no land war going on around her. When the half-man, half-reptile General Zerd invades Cija's home country, the Dictatress offers him her daughter in marriage after instructing her to kill him. Zerd takes Cija prisoner, and there begin some intercontinental adventures that change the princess irrevocably....

Flawed and obscure though it is, Atlan is notable for its originality. It's also probably the only series that can be accurately described as a Gothic Jungle Opera, influenced as it is by Mervyn Peake's Gormenghast, the works of Rider Haggard, the Tarzan series, old Gothic novels, and obsolete anthropological studies. If nothing else, this series probably represents the dying days of the pre-The Lord of the Rings-influenced fantasy genre, which would never revisit the "elder Earth" theme in quite the same way. Tanith Lee has cited this series as an influence on her work (see The Storm Lord), and Gene Wolfe's Book of the New Sun takes some rather obvious cues from Jane Gaskell's magnum opus.

In order, the books are:

The Serpent and The Dragon were originally published as one novel before they were Divided for Publication.