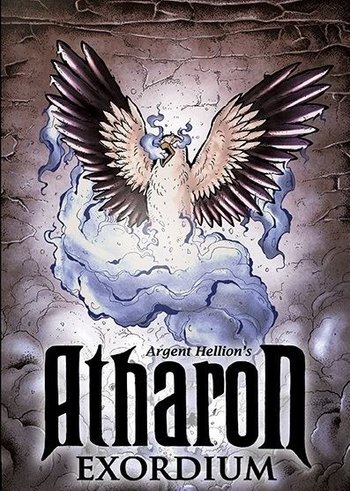 The cover doesn't reveal much, but that suits the tone of the book just fine.
Atharon Exordium is the first book of low fantasy series Atharon, written by the author going under the pseudonym Argent Hellion. Like Mogworld, the inspiration came from playing MMORPGs and it shows on many places in the setting. The writing of the book was finished sooner than the publishing of Mogworld, but the search for publisher took longer. The first version of the book was a try by the author and his gaming friend to describe their adventures with their various guilds in multiple online games, so Author Avatars abound (there are at least two, by author’s admission and spotting them and characters inspired by real people is a popular game among the fanbase). It was toned down and thoroughly rewritten before the publishing, but parts of the MMO setting remain. Among other inspirations was A Song of Ice and Fire series from George RR Martin, in a way that the book follows multiple POVs in various chapters. Unlike ASOIAF, most chapters are grouped by the POV character and so follow one another.
Advertisement:

Broadly speaking, one of the plots follows an apprentice named Nick in his tries to become a master of a healing magical discipline (a classical support class in an MMO) while the other follows an old Manser teacher training her last apprentice (a classical magical PVP/damage dealer class) before the war claims them all. There are dark things on the horizon, foul magic is afoot and not much time passes before first people die, long absent gods of the world get involved again and the plot starts in earnest. Sample chapters can be read here