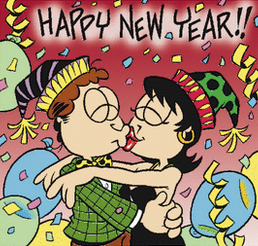 "Why, my New Year's Eve kiss is the most important one of the whole year. It sets the tone for the next 365 days. One year, I didn't get kissed at midnight on New Year's Eve, I didn't get lucky till after the Orange Bowl."
— Blanche, The Golden Girls
Advertisement:

It's the New Year! Once the clock strikes twelve, everybody's going to celebrate, and some people want to celebrate by sharing a kiss with someone special, often accompanied by fireworks. In many Western works, locking lips at midnight isn't just a possibility, but a necessary tradition, and characters will spend their entire New Year's Eve preparing for that romantic moment.

date the New Year's kiss back to the Festival of Saturnalia in ancient Rome, where Romans honoring the god Saturn would throw parties during late December full of debauchery - including kisses. The kiss as a tradition, however, dates back to English and German masquerade balls thrown to celebrate the new year, where removing your mask for a kiss symbolized purity. It's often said that the New Year's kiss secures good tidings for a relationship in the coming year, and failing to secure this kiss may bring bad luck. While some works use this to provide stakes for an established relationship, it's just as common for characters to frantically grab the nearest person during the last few seconds of the countdown, just so they can have a kiss period. This can be a good setup for a Meet Cute or a Ship Tease. Of course, there's no guarantee the closest person for a New Year's kiss won't be your Abhorrent Admirer or somebody just as unpleasant.

Compare Under the Mistletoe, another holiday kiss tradition.

Locked in a romantic bookstore at midnight on New Year's, Dash and Lily share a kiss.

Locked in a romantic bookstore at midnight on New Year's, Dash and Lily share a kiss.