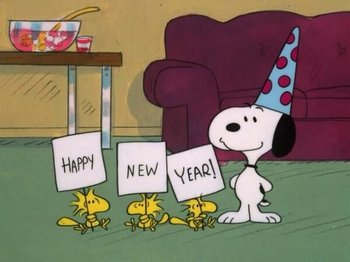 Peppermint Patty: Have you made any New Year's resolutions, Chuck?
Charlie Brown: Yes. You know how I always dread the whole year? Well, this time I'm only going to dread one day at a time.
Advertisement:

Happy New Year, Charlie Brown is the 30th Peanuts special, originally aired by CBS on January 1, 1986. It later moved to ABC, where it was paired with the 1980 special She’s a Good Skate, Charlie Brown. In 2020, it was acquired by Apple TV+.

Over Christmas break, Charlie Brown is assigned to read War and Peace by Leo Tolstoy. When Peppermint Patty invites him to a New Years party, he's torn between continuing to struggle with the Doorstopper and attending the party with everyone else. He particularly would like to go with the Little Red-Haired Girl, much to the annoyance and jealousy of Peppermint Patty.

The "Peanuts" gang celebrates the arrival of the New Year

Example of:
New Year Has Come

The "Peanuts" gang celebrates the arrival of the New Year