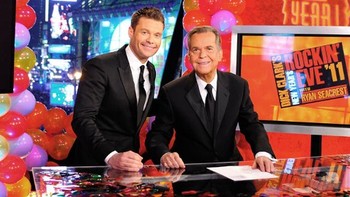 This is what New Year's Eve in New York looks like.
As this program spreads across multiple calendar years, most years given below are the year of January 1, not December 31.
Advertisement:

It all began in the early 1970s. Dick Clark did not think the CBS New Year's Eve show hosted by Guy Lombardo attracted a young audience. He felt that the program was for an older audience because of its use of old-time traditional pop music with people in fancy tuxedos. He decided he would create a new New Year's Eve show just for a young audience, so he named it New Year's Rockin' Eve to cement its demographic of younger viewers with its more fun and upbeat atmosphere. On December 31, 1972 the very first program aired, Three Dog Night's New Year's Rockin' Eve hosted by Three Dog Night. After just two years the show would move to ABC and Clark would take over the duty of producing and hosting the show. After Guy Lombardo died in 1977, and took the presence of his show with him, New Year's Rockin' Eve grew into the icon of American television it is today.

The show would go on to last for decades, and would often be hosted by a guest host along with Clark. Even though the show centered on musical performances, it also brought New York City's famous Times Square ball drop to American audiences. For 2000 the show was not seen because of ABC's participation in the multi-country special 2000 Today but Clark was still present for his annual tradition of counting down the ball drop, seen around the world for the first time because of the consortium of broadcasts. In 2004 Clark suffered a stroke that would leave him unable to host for 2005, that year instead being taken by Regis Philbin. Clark returned for 2006 but his stroke left him with a far reduced role. However though he would still count down the ball drop to midnight. The following year Ryan Seacrest took over as main host. Clark continued to appear for the countdown every year until his death in 2012. The show would continue with Ryan Seacrest as main host and producer. In the five decades the series has aired, it has become the primary New Year's Eve program in America and made Dick Clark a face associated with the holiday.