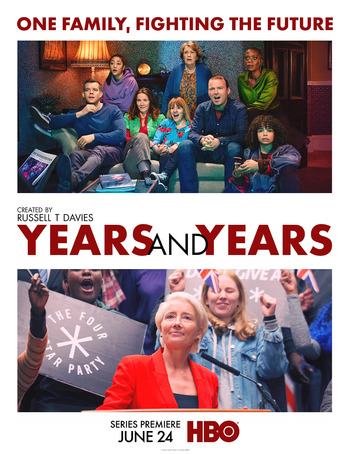 "I used to be bored by politics. Those were the days."
Advertisement:

Years and Years is a 2019 BBC/HBO Mini Series created by Russell T. Davies.

Starring Emma Thompson, Russell Tovey, Anne Reid, Jessica Hynes and Rory Kinnear, Years and Years follows three generations of a Manchester family, the Lyons, over the following 15 years against the backdrop of an increasingly uncertain and unstable world.

Daniel is evaluating his relationship with Ralph, Stephen is navigating teenage daughters with his wife Celeste, Rosie is balancing being a single mother and dating, and no one has seen Edith in years. Presiding over them all is Gran, the imperious Muriel.

And in the meanwhile, a little-known think tank director is making her move into mainstream politics.

Years and Years contain examples of:

"This is the world we built. Congratulations! Cheers all!"
Feedback

Where are we going?

One of many montages from 'Years and Years', a drama series that looks into the near future. (episode 2)

Where are we going?

One of many montages from 'Years and Years', a drama series that looks into the near future. (episode 2)