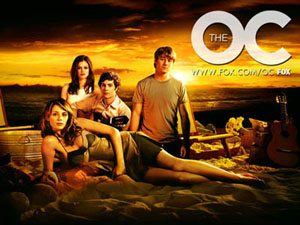 We've been on the run, driving in the sun, looking out for number one — California, here we come, right back where we started from...
— Phantom Planet, "California", The O.C. theme song.
Advertisement:

The O.C. is the story of Ryan Atwood (Benjamin McKenzie), a troubled teenager from Chino, and the Cohens, the family that takes him in. Ryan and his brother are arrested for grand theft auto, but Ryan's idealistic public defender, Sandy Cohen, recognizes Ryan's intelligence and offers him a way out. When Ryan's alcoholic mother and her abusive boyfriend kick him out, Ryan has no choice but to call Sandy.

Ryan is thrust into the glamorous world of Orange County, and into the lives of the Cohens and their neighbors. There's Kirsten Cohen, Sandy's kind, but slightly guarded wife; nerdy and isolated Seth Cohen, their son; Marissa Cooper, their beautiful but troubled neighbor; Julie Cooper, Marissa's scheming mother; and Summer Roberts, Marissa's best friend. Ryan's first meeting with Marissa sets off sparks—too bad she's dating a Jerk Jock. Seth has loved Summer for years—too bad she doesn't know he exists.

With Ryan around, things are changing fast. Ryan, Marissa, Seth, and Summer are about to endure breaking up, breaking down, parties, proms... everything teenagers would normally be expected to go through, but with the added drama of living in the O.C.

This is a show about references.

One official TV Tropes Wiki No Prize is up for grabs for each example of an other-media reference from this show.

Not to be confused with an abbreviation for Original Character.

In 2021 Rachel Bilson and Melinda Clarke started the podcast Welcome to the OC, Bitches!.