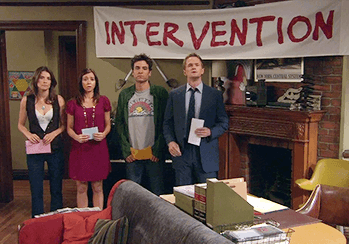 You're ruining your life. We're here to do something about that.
Troper...we need to talk.
Advertisement:

We've put this off for too long. We've watched this going on, and we're not going to take it any longer. Don't try to argue, this is for your own good.

Now, sit down there while we describe Staging an Intervention.

This occurs when a group of friends, family, loved ones of a character who's caught in a web of bad habits, usually addictions of some sort, that are leading them on a downward spiral decide to take action rather than sit there and watch them self-destruct. They confront the individual about their habits, and declare that they're not willing to be bystanders any longer. The phrase "We've made you an appointment, and we'd like you to keep it" may be heard, as they drag said individual off to see a professional counselor or to rehab.

This is an Undead Horse Trope. In serious examples, the person being intervened on has a real problem, and the people doing the intervention have good intentions. However, this is often subjected to parody. The person being intervened on may have no so serious addiction, the intervention may be staged as a form of revenge against the person, or may be Played for Laughs in other ways.

This can sometimes happen partway through a Descent into Addiction character arc. Contrast Toxic Friend Influence.