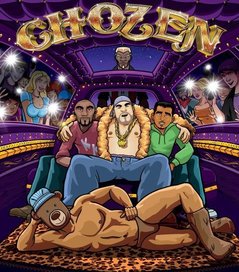 Ten years ago, Phil Cullens (voiced by Saturday Night Live cast member Bobby Moynihan) was a popular Straight Edge rapper, doing school functions and the like. There was a wrench in this situation though: Phantasm, the Ax-Crazy thug of the group he was in.
Advertisement:

When Phil confronted Phantasm over a room full of kidnapped girls, drugs, hookers, and guns, he was knocked out and framed.

Crashing with his sister, Chozen sets out to reach the top of the rap game, and put Phantasm in his place for what he did.

Chozen was paired up with Archer on the FX lineup, debuting on Jan. 13, 2014. Unfortunately, the series struggled to find an audience (being scheduled against the runaway hit Rick and Morty didn't help), and the series was cancelled shortly after its first season finale. Only 10 episodes aired, with three unaired episodes being included on the Amazon DVD.