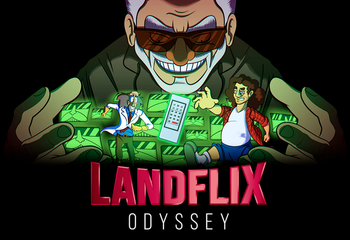 Landflix Odyssey is an upcoming Platform Game by Fantastico Studio. It was funded

The game follows Larry, a lazy binge-watcher who suddenly finds himself trapped in a dimension that seems to be based on Landflix. With the help of his Uncle Doc, Larry must traverse five worlds in Landflix, all based on the shows on it, in order to defeat the evil CEO of Landflix and escape to the real world.