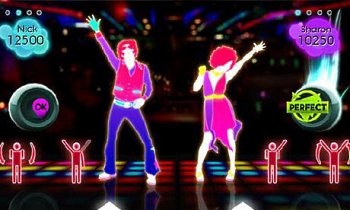 All you gotta do is just dance!

In 2009, Ubisoft released a then-new breed of dance-based Rhythm Games for the Wii. Unlike the "press button" gameplay such dance games exhibited at the time, a notable example being Dance Dance Revolution, the gameplay capitalizes on the motion controls which defined the Wii and has the player mirror the on-screen dancer's choreography, expanding on the dance minigame in Rayman Raving Rabbids: TV Party. What also made the game stand out is that the dancers aren't digital 3D models animated by hand or mo-cap; they are real actors in makeup and costumes, performing the choreography.

Critics panned the game for its poor motion detection and lack of unlockables, and it seemed Ubisoft's prediction of the game's failure was right. However, the casual audience the game targeted loved it, as they cared more about dancing to music and having a good time than scoring big or unlocking new content. The game became a runaway hit, maintaining sales even over a year after its release.

Surprised by this, Ubisoft started working on the sequel and spinoffs immediately. Because they listened to the critics and improved on the mechanics, and gave the game actual marketing, unlike most Wii sequels, the sequel sold even better than the first. The Just Dance series was born and new entries are released annually, with newer songs and fancier routines for players to enjoy and dance along to. Just Dance remains Ubisoft's second-biggest Cash Cow Franchise, behind Assassin's Creed, to this day.

The surprise success of the first game caused a revival in dance game releases, not only for the Wii, but also Dance Central, Dance Paradise, and Dance Masters for the Xbox 360 Kinect, and Singstar Dance for the PlayStation 3.

On January 14, 2019, it was announced that Just Dance would be receiving a film adaptation by Screen Gems. For now, the Dance Dance Revolution film adaption in works has a rival.

Now has a Shout Out page.

All you gotta do is just tropes!: