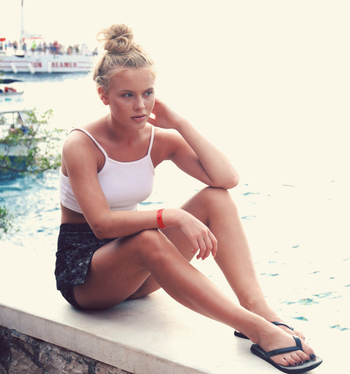 She will never forget you...

Zara Maria Larsson (born 16 December 1997 in Stockholm) is a Swedish pop singer. She first made a name for herself after winning Talang, the Swedish equivalent of America's Got Talent. In 2013, five years after Talang, she had a huge comeback with "Uncover", which became a #1 hit in Sweden that February.

In 2015, she released the songs "Lush Life" and "Never Forget You" (a duet with British EDM star MNEK). Those two songs broke her into the global pop scene, going top 5 in almost every country they charted in, and in the case of "Never Forget You", also becoming a big crossover in the United States. Larsson collaborated with the likes of David Guetta and Tinie Tempah on some of their hits.