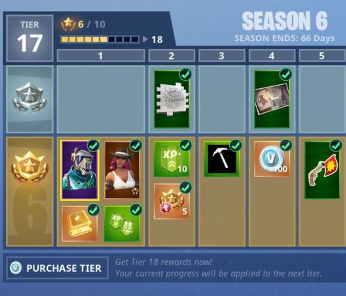 Your typical Rewards Pass. Rewards on the top half can be earned by all players for free, while rewards on the lower half can only be earned by those who purchased the Battle Pass.
"Oh. Your catalog level went up. Well, here's your reward. Keep up the good... work? Is it work? Whatever. Keep doing it."
— Harmony, Splatoon 3
Advertisement:

The Rewards Pass (more commonly called a "Battle Pass") is a rewards system where players usually pay a fee to unlock the titular pass, and then fill up an experience bar as they play the game. Once the experience bar is full, the Pass levels up. Each level has a different reward associated with it, usually a cosmetic.

It's a very common way for game developers to keep their game afloat, and a much less controversial alternative to Loot Boxes, since players can see everything they can get before they buy it (although many games have both Rewards Passes and Loot Boxes).

Rewards Passes are also time-limited to some extent, usually over a period of a few months that lasts the update cycle, with each reward being exclusive to the current pass, making it more tempting for players to buy it, and thus serving as a Revenue Enhancing Device by preying on "loss aversion" or "FOMO" (Fear of Missing Out). If a player feels that they won't be able to unlock their desired rewards before the pass expires, or just wants to get the good stuff quickly, then many Rewards Passes permit directly purchasing levels for an additional fee. It's basically a timed subscription by another name, and with a less forceful method of getting players to invest time and money into the game.

Most games that utilize a Rewards Pass tend to feature a free "basic tier" that is available to all players in addition to the paid tier of rewards, though as incentive to purchase the latter, the free rewards tier usually has fewer, less exciting rewards that are also spaced far apart. In this scenario, buying the paid rewards tier will grant the player rewards from both portions of the battle pass, and levels gained for a free Rewards Pass will be compatible with the paid one: that is, if a player levels the free Pass to level 10 and then buys into the premium portion, they will receive all premium rewards up to that level. Rare is the game that only has a free Rewards Pass, but they do exist.

The Trope Codifier is Fortnite, although similar systems have existed prior to 2018 with (Dota 2 and Team Fortress 2 for example, have similar systems that operate a bit differently).