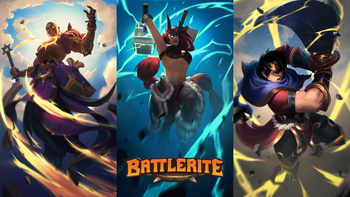 Battlerite is a multiplayer online Action Game developed by Stunlock Studios. The game is a Spiritual Successor to Bloodline Champions, and shares many similarities to it. Like its predecessor, Battlerite aims to provide an experience similar to a Multiplayer Online Battle Arena game such as League of Legends or Dota 2, while removing many elements that slow down gameplay such as farming, gaining levels, respawning, and lanes, leaving only combat between players.

The primary game mode of Battlerite is Arena. The goal of this mode is simply to eliminate the enemy team before they eliminate yours. Each character has a normal attack, five special skills (including one Energy skill) and an Ultimate ability. Attacking the enemy or healing teammates gives your character Energy, which can be used to cast improved (EX) versions of two skills, to use the character's Energy skill, or saved up to unleash the character's Ultimate. To mix things up, an Orb will periodically appear in the center of the arena, which awards Energy and life bonuses to the team that destroys it.

The game's namesake is the Battlerite system. Each character can choose up to five Battlerites, which add specific effects and improvements to certain skills, ranging from increasing damage to reducing cooldowns to inflicting effects on allies or enemies.

Battlerite launched as paid early access in September 2016, and went free-to-play on November 8th 2017. Players who paid for early access get all characters unlocked for free automatically.

A side game, Battlerite Royale, features the cast of Battlerite fighting Battle Royale-style on Talon Island to be the last one standing. Cosmetics and currencies are carried between both games, but Champions need to be unlocked separately. It became free-to-play on February 19 2019.

, or get the game on Steam here

. The Book Of Lore, which provides details on each character's story, is here

Tropes found in the main game

Tropes from the Book of Lore