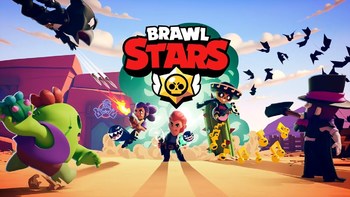 "You got a vest wearing cactus, grave digging bats, and a killer biker crow. Oh, and if you stop to explain-(gets stabbed by Spike's cacti)...you're a goner."
— Poco in the "No Time To Explain" trailer
Advertisement:

Brawl Stars is a casual MOBA game soft-released by Supercell in late 2017 and was globally launched in December of 2018. It's available on the Google Play Store and the iOS App Store. The gameplay is very similar to twin-stick arcade games, such as Smash TV or Robotron: 2084, where you have one button to move, and another to shoot. However, this game is catered for online play, bullets come out much slower or have limited range and you have a limited number of shots to fire before automatically reloading.

There are a total of 10 game modes in rotation with 5-6 on display at a time. The game modes are "Gem Grab", "Showdown", "Brawl Ball", "Robo Rumble", "Boss Fight","Super City Rampage", "Big Game", "Bounty", "Heist", and "Siege", with different map layouts every day. Most of these modes are played with two teams of 3 players, with certain exceptions.

Every Troper for Themselves!