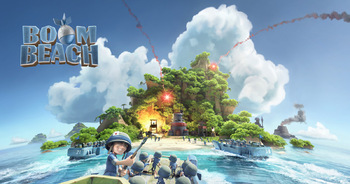 Boom Beach: Come with a plan, or leave in defeat!
Advertisement:

Boom Beach is a combat strategy game with similar gameplay to Clash of Clans made by the same developer, Supercell. It's on both iOS and Android.

You are a player that is specifically sent to the archipelago to free the enslaved islanders from Hammerman and his Blackguard Armies. As you build up your bases to get stronger, more powerful Blackguard bases appear, including mercenaries, resource bases, and factory bases.

Despite the gameplay being similar to its other game Clash of Clans (even having a Builder Base like mode), it has a lot of distinct mechanics that separates itself from its more popular counterpart. Instead of spells, you use the Gunboat to support your armies, especially in redirecting them. Also, when your Headquarters are destroyed, rather than giving you a star, the raid instantly ends. There are also statues power stones that can help aid your preferred playstyle. Finally, even though you can join a task force which is basically a clan, instead of war with an opposing task force, you engage in operations that has you defeat the blackguard factories.