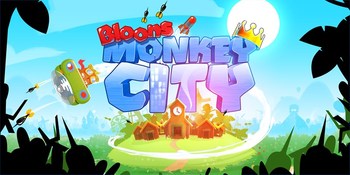 Bloons Monkey City is a spinoff of the Bloons Tower Defense series featuring more city simulator elements than other games by Ninja Kiwi. The point of the game is to build a city consisting of various Base Buildings (which allow you to have a certain tower type, at a rate of one per building), Upgrade Buildings (which unlock most, but not all, upgrades for your towers), Special Buildings (which help with those upgrades that you can't get with the Upgrade buildings), Player Versus Player Buildings (which enable you to deploy bloons for attacking other players, and generating and storing the necessary Bloontonium to do so), and Resource Buildings (which generate power and create and store money). Also, there are tiles that you must collect to build your city. Tiles that are infested with bloons.

The game has been released on Ninja Kiwi's site and the iOS and Android App Store and Google Play, with the mobile version having all the towers from the mobile versions of BTD 5. (While the original BMC that runs on Flash is defunct as of 2021, both it and the BMC Mobile version are available on Steam for free, the former located [with all online functionality] inside 'Ninja Kiwi Archive', a collection of 50+ no-longer-supported Flash games.)

Most of the tropes in this game are listed in the entry for Bloons Tower Defense, but this page has some tropes listed on here that are specific to Bloons Monkey City.