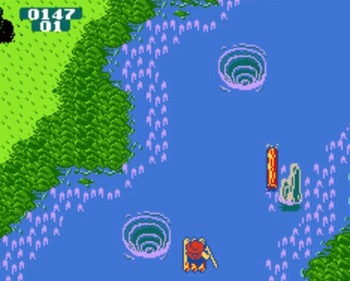 The marine equivalent of Gusty Glade. Instead of wind currents blowing you all over the place, there are fast-moving currents in a river, ocean or other body of water. The player character usually either has to simply ride them out or maneuver whatever he or she is riding on to hit the correct current for the location they're traveling to. Mess up, and they're pushed way off course. If you're really unlucky, you may wind up stuck in a whirlpool.

Another variation, found in underwater levels, is that the current requires speed boost phlebotinum or help from another character to get past them or block the current off. Alternately, they may serve as a Broken Bridge or Chokepoint Geography to force the character in a certain direction in the game, or be something like a one way street. In this case,making a mistake can get you blown all the way back to the beginning. Sometimes, the liquid in question can be something other than water as well.

In both cases, fast reflexes are usually required to avoid missing your turn and keep you going in the right direction. Often leads to the Inevitable Waterfall. Compare River of Insanity, a level where you have to traverse or cross a dangerous river, usually on foot.

Mario and the gang go through Eddy River Rapids with a boat, dodging rocks along the way.

Mario and the gang go through Eddy River Rapids with a boat, dodging rocks along the way.