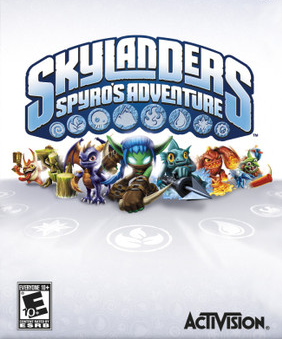 A new generation of heroes have set out to make their own legend!
Advertisement:

Skylanders is a series of video games and spinoff materials launched by Activision in 2011. Part Spyro the Dragon reboot (another one), part brand new franchise, Skylanders took a radical new approach: The games come with a device called a "portal," plus three toys. The idea is that if you want to play as a character, you put their toy on the portal and the game instantly switches to the new character. This can be done at any time, even in the middle of game play. With dozens of toys available, this does make this game Merchandise-Driven, but since the game comes with three toys already you don't have to buy more unless you want to (unless you want 100% Completion, but even then you only need one of each 'element').

The series was a smash hit with children thanks to its humor, top-notch voice actors, beautiful graphics and simple beat-'em-up gameplay. The toy gimmick drives the cost for the whole experience up (similar to Activision's deceased Guitar Hero), and while the more cynical may call this nothing but a cheap merchandising ploy, the idea was novel and well-executed, setting it apart from other video games (Well, until a bunch of other games started copying it, that is).

Spyro's toy is a Composite Character with the move set of classic Spyro, backstory of the Legend Spyro, and a new design based on a scrapped adult version of himself. Fan favorite Cynder from the Legend series also returns as a playable toy, and Spyro's trusty dragonfly Sparx appears as a non-playable item toy. Malefor, the Big Bad of the Legend series, appears in several characters' backstories and shows up in person in the tie-in comics. The last game in the series was in 2016, which began using pre-existing video game characters from franchises besides Spyro such as Bowser, Donkey Kong, Crash Bandicoot, and Dr. Cortex.

Unfortuntaly, the series had been facing diminishing returns attributed to the oversaturation of the "toys to life" genre on the market, and there's been no mention of a continuation of the franchise since, save for a few spin-offs.

There are also a series of tie-in novels that serve as prequels to the first game and some comics set between games three and four that expand on the Skylanders as characters (whereas in-game, they can't really interact with the story at all since you can play as any character at any time).

As a part of Activision Blizzard's expansion into creating non-video game content based off their properties, a Skylanders Academy spin-off TV show was announced, with Justin Long taking over as Spyro, Ashley Tisdale as Stealth Elf, and Norm Macdonald as Glumshanks, along with Richard Steven Horvitz (reprising his role as Kaos), James Hetfield and Harland Williams as voices. It debuted on October 27, 2016 as a Netflix Original, and ended in 2018.

Brain: I like to think of myself as a tolerant guy, Kaos. But bringing up my lack of thumbs? Well, that crosses a line for me. And you know what else? The portal master has a much better imagination then yours! Especially now that I'm on their side!
Eon: All Imaginators are amazingly effective in this zone.
Feedback