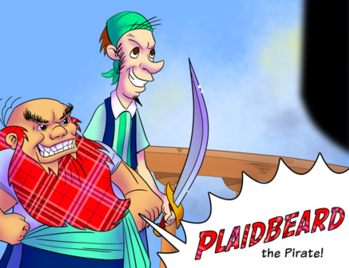 Probably as a result of infamous sailors like Blackbeard and the Barbarossa brothers,note 'barba rossa' is Italian for 'Redbeard', though the brothers were Turkish privateers it's popular to give pirate or nautical characters names that reference their facial hair — and not just sailors, either.

Despite the title, the beard name isn't restricted to names based around colors, or even necessarily beards (you'll see names like "Captain Blackheart" or "Captain Deadeye" about as often, and of course there's Captain Hook).

See also Dressed to Plunder, Father Neptune, and Seadog Beard. And strangely enough, since blue is a color associated with the ocean, The Bluebeard is completely unrelated, being a Serial Killer rather than a Pirate.

Dr. Brainpart is a smiliar convention reserved for Mad Scientists and their ilk.