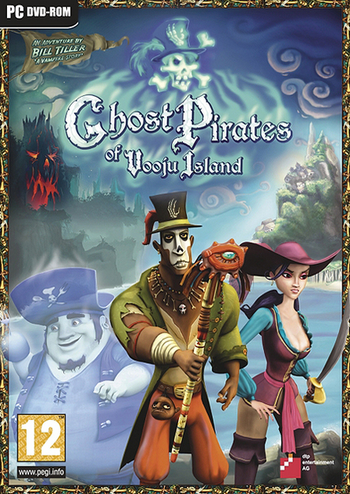 Pirate Captain Greenbeard has a plan: he is going to rebel against Captain "King" Flint and takes over the Azurbbean Sea. His scheme is overheard by Flint's spy and swashbuckler, the impossibly shapely Jane Starling. Starling hijacks the row-boat of Blue Belly, Greenbeard's rotund, happy-go-lucky ship cook, and the two head for Vooju Island to inform Flint's ally Papa Doc Mystère, a renowned voodoo master. They find Flint himself at Papa Doc's temple, ostensibly summoned by the voodoo doctor himself. It is then revealed that the whole thing is a trap set by Papa Doc's "loving" wife Queen Zimbi. Zimbi imprisons Flint and his crew, and magically rips the souls out of the bodies of Papa Doc, Blue Belly, and Jane Starling.
Advertisement:

Obviously our heroes have to find a way to right the wrongs — but first, they have to get their bodies back.

Ghost Pirates of Vooju Island is a point-and-click Adventure Game for PC, designed by Bill Tiller (visual artist of The Curse of Monkey Island and A Vampyre Story). An interesting mechanism in this game is that each of the three protagonists can communicate and see through the eyes of the other two, and often you have to turn to your comrades for advice. It was released in November 2009 in Tiller's native Germany, and in 2010 everywhere else.