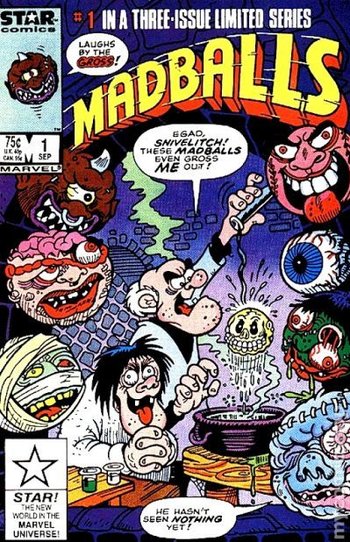 A popular toyline of rubber balls with grotesque faces, the Madballs had a short-lived comic book adaptation printed from 1986 to 1988 by Marvel Comics subsidiary Star Comics.
Advertisement:

Originally starting off as a three-issue miniseries, the comic began with the first series Madballs being normal balls mutated and brought to life by toxic chemicals from the lab of Dr. Frankenbeans, who becomes obsessed with capturing the Madballs.

The miniseries proved popular enough to be extended into an ongoing series, which introduced the second series Madballs and the Super Madballs, but the series was cancelled after ten issues.