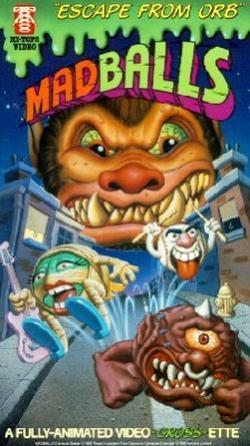 The Madballs were a toyline of rubber balls with grotesque faces and amusing names released by American Greetings back in the 1980's. In 1986, Nelvana released two animated direct-to-video films about the Madballs, Escape from Orb and Gross Jokes. Escape from Orb was about a rock group known as the Madballs (Screamin' Meemie, Freakella, Dusty, Skull Face, Horn Head, Aargh and Slobulus) hoping to escape planet Orb so that they can be free of the tyranny of Commander Wolfbreath. Gross Jokes was a film about the Madballs telling crummy jokes and performing inane skits.