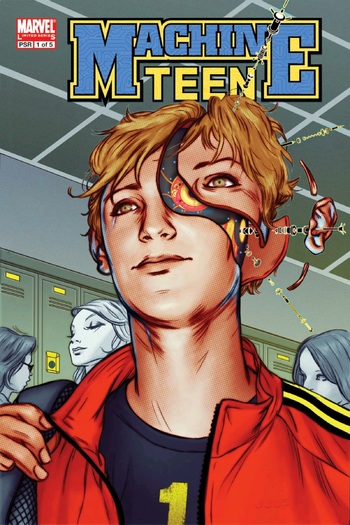 The main character, Adam Aaronson is an Ordinary High-School Student and has a good life: he is captain of the all-star football team, a straight 'A' student and is liked by everyone. However, he discovers that he is really a robot created by the man he thought was his father, Isaac Aaronson. The story is about him learning he is a robot, and escaping Corrupt Corporate Executive, Holden Radcliffe.

Machine Teen also appeared as a supporting character in House of M: Incredible Hulk and in Avengers Academy in issue #21 (Jan 2012) and issue #26 (April 2012).

Machine Teen contains such tropes as: