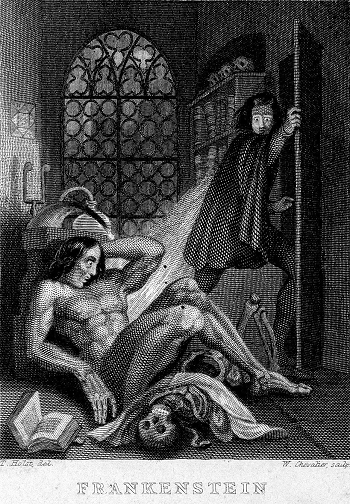 Frankenstein; or, The Modern Prometheus, usually abbreviated to Frankenstein is a novel by Mary Shelley. It was originally published in 1818. It had a 1823 reprint without Shelley's involvement and a third edition in 1831, this time with significant edits from the author. Frankenstein is considered a Trope Maker of Science Fiction (if True History isn't counted) and inarguably has vast historical significance.

The novel tells of a college student, Victor Frankenstein, who unlocks the secrets to Creating Life. He uses this knowledge to create an artificial man, larger and stronger than most mortals, by means which he chooses not to describe. While he is initially triumphant with his success, a few moments of observing the flailing and moaning patchwork being leaves Victor disgusted by and fearful of his creation. Realizing the ramifications of his success, he is horrified. He abandons the Creature and flees to his family's estate.

In his absence, the Creature is forced to come to grips with suddenly finding itself alive and alone without explanation or guidance. He learns about humanity by watching a family cottage from afar, but is again driven off when he attempts to offer his friendship- one of many bad run-ins with humanity which leave the monster bitter and cynical. Eventually, the Creature comes to resent his creator, whom he views as his father, for abandoning the Creature to a life of torment, and decides to come home to seek vengeance against Frankenstein...

The subtitle, The Modern Prometheus, compares Victor Frankenstein to the Greek titan Prometheus, who brought the secret of fire from Mount Olympus to mortal men, reflecting on Frankenstein's spiritual would-be theft of the secret to creating life — but like Prometheus, Frankenstein also came to regret his transgression. Many would say that Frankenstein was the ultimate warning of Science Is Bad, though similar stories were common throughout the industrial revolution and it is not even clear whether the act of creating the Monster was bad in itself, if the world wasn't ready for it, or Frankenstein was just a horrible and abusive parent.

The Vampyre by John William Polidori happened to be written around the same time, while both authors (along with her husband Percy Bysshe Shelley) stayed at a villa near Lake Geneva during the summer of 1816.

Frankenstein has had countless adaptations and unofficial sequels, beginning with a stageplay. Fred Saberhagen wrote The Frankenstein Papers, which posited what happened after the Creature left the ship. Manga creator Junji Ito created one of the more faithful adaptations of the story in recent years. For a complete list of the films, see Frankenstein.