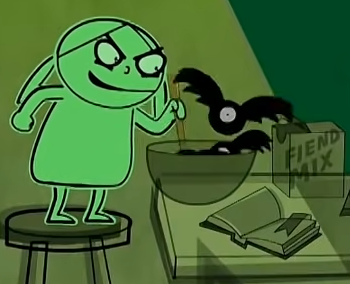 Making fiends, making fiends
Vendetta's always making fiends
"The Putty Patrollers will make space dust out of those kids! And the beauty is, if they don't, we can always make more. Now into the Monster-Matic they go. Ten seconds should do it."
-Finster, Mighty Morphin' Power Rangers
The Maker of Monsters is a character, usually a villain, who is notable for creating monstrous creatures, whether ex nihilo or through breeding or mutation of preexisting beings. These monsters may be unique, one-off beings, but more commonly large numbers of similar creatures will be created together or over time. In either case, the Maker of Monsters will likely shape numerous creations over their career, instead of only making one or two beasts in isolation.
Advertisement:

This character's precise motivations for creating monsters can vary. In horror, pulp and science fiction settings, this is typically the province of the Mad Scientist, who will usually be pushing the limits of science a la Frankenstein just to see if he can or may be an Evilutionary Biologist seeking to create "perfect" lifeforms. In fantasy settings, this is often embodied in powerful wizards creating strange creatures through arcane research or dark lords breeding monsters for their armies. When the wizard and the dark lord are one and the same, it's almost a given that they'll be this as well.

Oftentimes, the creatures made by these characters will outlast their creators, breeding on their own and remaining a constant threat and presence in the world long after their makers' downfall.

Introducing such a character may serve a number of purposes. If they're active in the story's timeframe, they may serve as a way to keep the bad guy's army monstrous, diverse and constantly adaptive. If they're part of a more distant backstory, they may be used as a way to explain where a world's diversity of monsters originates from.

See also Mother of a Thousand Young, where a creature literally births lesser horrors, Monster Progenitor, where a creature creates a single new species of its own kind through its progeny, and Evilutionary Biologist. Compare with Mook Maker, a video game variant where a device continuously spawns enemies for the player to fight until destroyed, which may overlap with this trope if the maker is an NPC. Compare also the Necromancer, who also specializes in the creation of less-than-presentable beings of a different sort. The products of these characters' work will often be Bioweapon Beasts. They are also a likely candidate to create a Custom Built Host. Compare and contrast Robot Master.