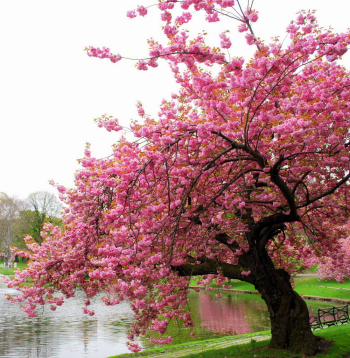 Variously defined as a lighter shade of red or a hue between red and purple known as magenta, pink has become a fundamental color term in the English language. The symbolic use of pink is ubiquitous in modern culture, but many of its most deeply-ingrained meanings in the West are not even Older Than Steam. Pink, this past century, has usually been associated with femininity (especially young girls), romance, love, and cuteness. Prior to the 1940's however, pink was largely seen as a masculine color due to it being a shade of red. In Japanese culture, it is the color of blossoming cherry trees, and as such associated with springtime and rebirth, but also death.

In German, Russian, and the Romance languages, rose is used as a color term for pink, as ancient and medieval portrayals of wild roses were often colored pink, and it's the oldest color that's cultivated. "Pink" in English is named after a type of carnation

, while Japanese, despite the prevalence of pink cherry blossoms, use "momo-iro", named after pink peach blossoms.

If you were looking for the pop singer P!nk, her page is here.

Alternative Title(s): Pink Is For Tropes