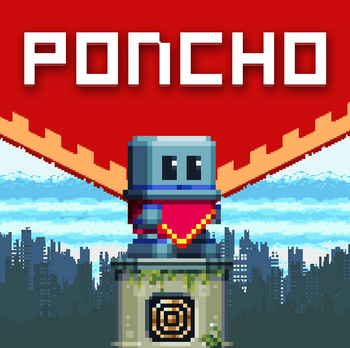 Poncho is a Puzzle Platformer developed by Delve Interactive and published by Rising Star Games. It was released on November 3rd, 2015 for PC and Playstation 4, with a Wii U port following on August 18th, 2016.
Advertisement:

The game has players control the titular Poncho, an adorable robot who awakens after an apocalypse has eradicated humanity, leaving only other robots to inhabit the world. Poncho sets out on a quest to determine what exactly happened, and maybe find some way of reversing it.

During the game Poncho can move left or right along with jumping like every other platformer protagonist, but he can also instantly shift between foreground and background layers at will. Jumping momentum is preserved while shifting layers, and since some platforms only exist in certain layers, exploring and navigating through the different layers is the only way to progress through the game.

No relation to the multiplayer shooter Secret Ponchos.