Purple is the New Trope 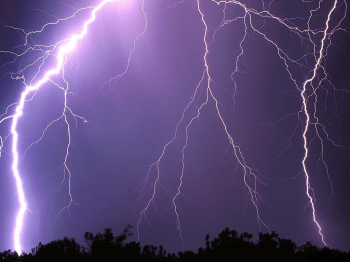 "The symbolism of purple is equally ambiguous. In terms of formal power, purple was, and often still is, the color of royalty or of the highest vestments of priesthood. And yet in terms of unbridled revelry, if Bacchus ever had a color he could claim for his own, it should surely be the shade of tannin on drunken lips, of John Keats's 'purple-stained mouth', or perhaps even of Homer's dangerously wine-dark sea."
— Victoria Finlay, Color: A Natural History of the Palette

If there's any color that conjures deep emotions more than blue, it's purple. Purple intensely resembles violet, which is the highest visible color on the human light spectrum, just before the (technically invisible) ultraviolet. It is a color that can be created in painting by combining red and blue paint. Purple as a color has symbolized royalty since antiquity (especially Roman / Byzantine), though in many cultures it wasn't considered a separate color from red. In modern times, purple is a very exotic and powerful color, while at the same time not being very subtle. Besides pink, purple is considered one of the most symbolic colors of the LGBT community, and occasionally associated as a color of solidarity between gay people and their straight allies.