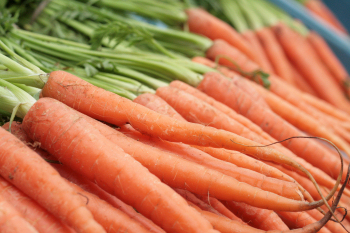 Orange is one of the fundamental color terms in English and many other languages. But it has only been so since recent times, as evidenced that most languages' words for the color orange are identical to the name of the fruit orange — in English, this color term usage only dates back to the time of Henry VIII. Old English had a word for the color we call orange — ġeolurēad — but it literally meant "yellow-red", as it was not yet culturally considered its own color.

As such, though orange is a ubiquitous color term in today's culture, many older concepts that appear orange are referred to as red or yellow. For example, nearly all naturally red hair appears orange. Even "pink" granite tends to be more orange in color. For similar reasons, orange is still a fairly rare color in emotional symbolism, but has adopted political meanings in regional symbolism, becoming the symbolic color of the Dutch House of Orange-Nassau, of Irish Protestants (as contrasted with green Irish Catholics), of Indian Hindus (as contrasted with green Indian Muslims), and more recently the Orange Revolution of Ukraine. In the few circumstances where orange invokes an emotional symbolism, it tends to inherit traits from both red and yellow, such as red's passion and yellow's energy.

Besides obviously the orange fruit, orange is also associated as the color of pumpkins, sweet potatoes, and carrots. This association with carrots is even newer than the color term itself, as the common orange carrots in the Western world were only bred that color a few centuries ago by farmers in The Netherlands, out of patriotic reverence for the House of Orange-Nassau. Before this, most carrots in the West were actually purple. No, really, carrots used to be purple

. And carrots come in other colors too

This index's name is a pun based on the title of the book, A Clockwork Orange, which also received a movie.