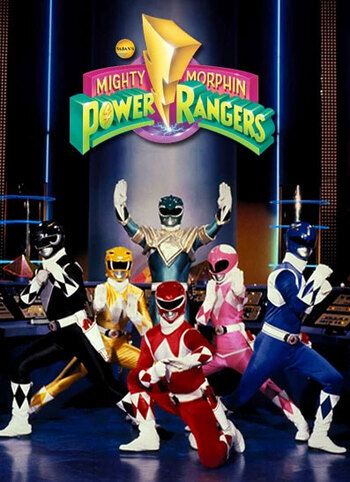 Mighty Morphin' Power Rangers is the first incarnation of Power Rangers and the one non-fans will remember as being all over the place in the mid-1990s. Creator Haim Saban took the idea of taking the action footage from the Japanese Super Sentai series and cross-cutting it with American footage of American actors. The end result was a cultural phenomenon that long outlived the original one-season idea.

10,000 years ago, a great war raged across the cosmos, pitting a wizard named Zordon against a sorceress named Rita Repulsa. The war ended with a stalemate; Zordon's essence was trapped in a time warp, while Rita and her forces were entombed in a sarcophagus wandering the vastness of space. The sarcophagus landed on a passing asteroid, with astronauts unleashing Rita and her forces, who decided to renew the war from the moon of an Insignificant Little Blue Planet. Zordon had long since set up a Command Center on Earth to be a sentry against her return, and with the help of his robot ward, Alpha 5, Zordon assembles his own team of warriors to combat Rita. Utilizing talisman called the "Power Coins" he selected five "teenagers with attitude"; Jason Lee Scott (Austin St John), Zack Taylor (Walter Emanuel Jones), Kimberly Ann Hart (Amy Jo Johnson), Billy Cranston (David Yost) and Trini Kwan (Thuy Trang). Each teenager was given a coin and Transformation Trinket called a "Power Morpher" to become enhanced fighters in armored suits and access to an arsenal of weaponry, along with Humongous Mecha based on dinosaurs called "Zords". Rita's came with her own forces; top lieutenant Goldar, the resident Those Two Guys Squatt and Baboo, and her scientist Finster, who would turn his clay sculptures into Rita's foot soldiers, the Putty Patrol, and various Monsters of the Week.

The initial curiosity of the series paid off in the ratings. It wouldn't become the juggernaut it became until the five-part miniseries "Green With Evil", in which Rita brainwashes the New Transfer Student, Tommy Oliver (Jason David Frank), and gives him a sixth power coin to serve as her own Green Ranger. The team manages to break the brainwashing and bring Tommy to their side. The response to this new Ranger was overwhelming, as the character not only became the Breakout Character of the series and the Trope Namer of the Sixth Ranger but can be considered the face of the entire franchise.

MMPR was intended for forty episodes, ending with the two-part "Doomsday" where Rita would be entombed once again because the Sentai footage was running out. However, the show's surprising success led the production team to seek ways to extend its lifespan. "Doomsday" was rewritten to be more of a mid-season finale and Saban commissioned new Kyōryū Sentai Zyuranger footage from the Sentai production staff, extending the show's first season to sixty episodes. The Toei-filmed action footage is referred to as "Zyu2" footage in fan circles.

When the series was renewed for a second season, to escalate the story a new Big Bad, Lord Zedd, displaced Rita and Zordon upgraded the Dino Zords into Thunder Zords, which was using the mecha footage from Zyuranger successor Dairanger instead of paying for more Zyu2 footage, with Ranger suit footage personally filmed in California. Midway through the season, there were contract disputes with Austin St. John, Walter Jones, and Thuy Trang, which led to them walking out on the series. The crew then scrambled with stand-ins, soundalikes and stock footage/audio for a few episodes before introducing Adam (Johnny Yong Bosch), Aisha (Karan Ashley) and Rocky (Steve Cardenas) as replacements while the original characters were Put on a Bus.

During a break in the season, Mighty Morphin' Power Rangers: The Movie went into production and released in the summer of 1995. It had a big budget treatment with radically different costumes and deliberately doesn't fit into the continuity of the series. As production on the movie went long, multiple episodes were filmed in Australia using existing locations and taking place in new locations.

The third season had Rita's brother, Rito Revolto, successfully destroy the Rangers' powers and the Thunder Zords, and the Rangers find the legendary creator of the coins Ninjor, who forges them new Power Coins based on modern creatures and the art of ninjetti. Retaining Zyuranger costumes still, Ninja Sentai Kakuranger served as the basis for the new Ninja Zords, and they introduced a partial morph where they fought in brightly colored ninja-themed outfits. In this season Amy Jo Johnson requested to leave and, unlike before, the production team had time to craft an exit story, with replacement character Katherine Hillard (Catherine Sutherland) brought in for a better Passing the Torch. In an escalation of villains, Rita and Rito's father Master Vile arrives and neutralizes the Rangers using Time Travel to reduce them back to preteens. Unable to use their own powers, Zordon sends out a request for help from aquatic humanoids from the planet Aquitar with their own Ranger team and led to a ten-episode miniseries called Mighty Morphin' Alien Rangers. The first appearance of new Ranger teams and costumes, the Alien Rangers used the Kakuranger costumes and unused mecha battles to that point. The Alien Ranger miniseries is seen as an extension of MMPR rather than its own thing, as concurrently the young Rangers went on quests through time and space to find the pieces of the powerful Zeo Crystal (a MacGuffin introduced earlier in the season) to resolve the problem. Their return with the completed Zeo Crystal was the jumping-off point for Power Rangers Zeo.

In the grand scheme of the franchise, MMPR is certainly the most iconic series but it had some quirks that were ironed out or improved upon in later series.

A Continuity Reboot movie, produced by Lionsgate and written by Ashley Miller and Zach Stentz (Thor, X-Men: First Class), was released on March 24, 2017.

A comic book series from Boom! Studios also began in 2016, updating the setting to the present day.

This incarnation of Power Rangers is the Trope Namer of: 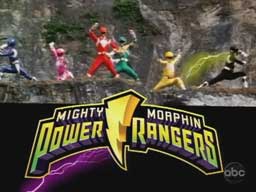 In 2009, Disney officially cancelled Power Rangers, with Power Rangers RPM serving as the supposed final season. However, to apparently appease disappointed fans, as well as fulfill contracts with stations, a "reversioned" version premiered in January 2010. Consisting of only the first 32 episodes out of the original 60 of season 1, the new version adds a number of visual effects but generally leaves the audio and editing untouched. A new toyline was unveiled as well. It was once numbered as the show's eighteenth year, only to be replaced by Power Rangers Samurai; upon news of Saban regaining the franchise, Disney pulled the plug with the final airing on August 28, coincidentally the date of PR's 17th anniversary.