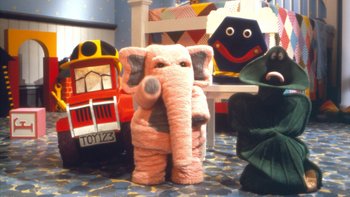 From left to right: Diesel, Johnson, McDuff, and Alfred.

Johnson and Friends is an Australian kids show that aired in the 90's, about a pink plush elephant toy named Johnson, who belongs to a boy named Michael, and the various adventures he has in Michael's bedroom with his other toys, such as a concertina named McDuff and a toy truck named Diesel.