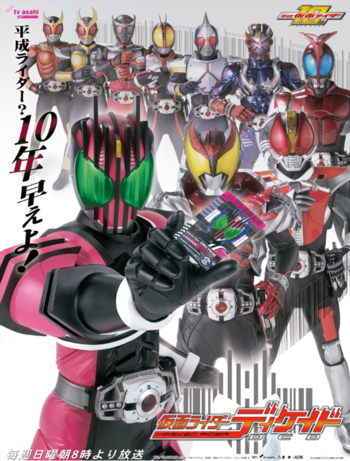 Destroy everything. Connect everything.
"Decade, destroyer of worlds. What do you see as you travel through many worlds?"
Advertisement:

Kamen Rider Decade (Masked Rider DCD) is the first 2009 series of Kamen Rider, created as part of the ten-year anniversary for the Heisei Kamen Rider Era. The series is a Crisis Crossover featuring all nine preceding main Riders from the Heisei series. Initially aired alongside the Super Sentai show Engine Sentai Go-onger and then Samurai Sentai Shinkenger, which it shared a crossover with in the Super Hero Time block.

The story is as follows: Each Kamen Rider series thus far has existed in its own parallel world. Unfortunately, these ten worlds have begun to be forcefully merged into one, which will lead to their destruction.

Tsukasa Kadoya is a (very bad) photographer by trade with Identity Amnesia. When his world literally starts to fall apart around him, he receives the power to become Kamen Rider Decade and is told that to stop the collapse of The Multiverse, he must travel to the other nine worlds and destroy the Kamen Riders that live there, absorbing their powers as his own.

Accompanying him on this journey is Natsumi Hikari, a girl whose family runs the photography studio that Tsukasa stays at, and who has been having a recurring nightmare where she witnesses the Rider War: A vast conflict that sees every Kamen Rider fall to Decade. There's also Yusuke Onodera, the Alternate Universe Kamen Rider Kuuga who befriends Tsukasa and decides to join him on his journey across the worlds.

As time goes by, it becomes evident that there are more than ten worlds caught up in the dimensional turmoil, and that a dark power lies at its root. Tsukasa also manages to attract some recurring antagonists: Daiki Kaito, an inter-dimensional thief who can transform into Kamen Rider Diend and summon past Kamen Riders to fight for him; and Narutaki, a mysterious man who believes that Decade is the source of The Multiverse's destruction and will do anything it takes to stop him.

Rather than just a straight reuse of the suits, the series promised to use the "parallel universe" aspect of the story to introduce new features to the universes (and excuse the replacement characters brought about by alternate universes).

The character, Henshin Belt and storyline were clearly intended to tie-in to the Kamen Rider Battle: Ganbaride game released in arcades across Japan.

Voted #14 series in the Heisei era, and #21 product overall in NHK’s All Kamen Rider Popularity Ranking.

I'm just a passing through trope. Remember that!

Example of:
Autobots, Rock Out!