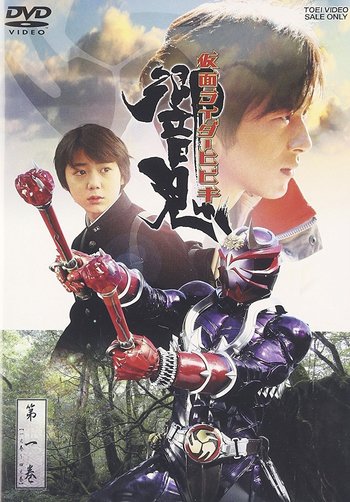 Hit the beat, keep your beat!

Kamen Rider Hibiki is the 2005-2006 series of Kamen Rider. The sixth installment in the Heisei Era, Hibiki was intended to be a radical departure from the standard Rider formula in order to shake up things in response to the declining ratings and sales of the franchise.

Deep within the forests of Japan, a secret war is being fought against the monstrous Makamou that prey on innocent humans. Standing on the frontline of this battle are the Oni: humans who have trained their bodies to harness supernatural power and defeat their demonic enemies.

A young boy called Asumu Adachi stumbles into this conflict when he meets Hibiki: a cool and confident man who is also one of the leading Oni of the "Takeshi" group. Asumu is unsure what he wishes to do with his life, and finds a mentor and role model in the reluctant Hibiki. He later meets Ibuki, a mellow Oni training a young girl named Akira to be his successor, and Todoroki, an excitable new Oni who wishes to create his own legacy under the watchful eye of his veteran mentor Zanki.

The story is told from the perspective of Asumu and is very much a Coming-of-Age Story focusing on the relationship between mentor and student, the old and new generation and the choices that we make in life. The Oni are all Musical Assassins, using their "pure sound" to purify the Makamou they fight. The series also averts Hard Work Hardly Works by showing the Oni training hard to maintain their bodies and ability to use the Oni power; in fact, an entire arc ("Summer Of Training") is devoted entirely to their training efforts.

The show suffered from poor toy sales and high production costs, and became one of the few Kamen Rider series to be Retooled. The producer and main screenwriters were fired and replaced, leading to a vastly-different tone in the final third of the series. Production was reportedly so disorganized that the script for the last episode was being rewritten while it was being filmed. Several of the actors went on to speak out against the changes, feeling that the final result did not reflect the true spirit of the show.

Partnered with the Super Sentai show Mahou Sentai Magiranger after initially airing alongside the final episodes of Tokusou Sentai Dekaranger in the Super Hero Time block.

In addition to the main series, Kamen Rider Hibiki has two spinoffs. Kamen Rider Hibiki: Asumu, Transform! You Can Be An Oni, Too!! is a DVD episode that was distributed by Televi-kun magazine. Kamen Rider Hibiki And The Seven Senki is a Non-Serial Movie that places Hibiki characters in a The Magnificent Seven Samurai homage. There is also a novel set in the same period as the film released in 2013, written by the same person who did much of the show's first half and which doubles as a crossover with Henshin Ninja Arashi.

Voted #17 series in the Heisei era, and #24 product overall in NHK’s All Kamen Rider Popularity Ranking.

Example of:
Autobots, Rock Out!