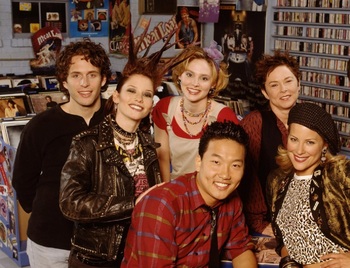 That '80s Show (2002) was a short-lived Fox-network spin-off of their That '70s Show, with a new batch of characters living in San Diego during the eponymous decade. It aired over 13 episodes from January to May 2002, and was cancelled after failing to gain a wide audience.

The show mainly centered around 22-year-old hopeful musician Corey Howard (Glenn Howerton), who puts off his career plans and works at the local Permanent Record store with the mercurial mohawk-coiffed clerk June Tuesday (Chyler Leigh) and sarcastic, sixties-in-the-mind owner Margaret (Margaret Smith). Living at home with his yuppie, hip, new-money dad RT (Geoff Pierson) and college drop-out, earth-hippie sister Katie (Tinsley Grimes) who mostly runs the house and puts together a string of enviormentally-conscious (or so she thinks) home-business ideas. Rounding out the cast of characters is Roger (Eddie Shinn), Corey's Ronald Reagan-and-self-help-tape loving best friend and wannabe-rich-guy, with an endless supply of hair gel and incredibly awkward (and random) dance moves, and Sophia (Brittany Daniel), Corey's openly bisexual ex-lover who becomes marketing director at Videx, leading to some unwelcome intrusions into the Howard Home and with a none-too-subtle crush on Katie. No doubt plenty of the usually wacky sitcom shenanigans, terrible hairstyles and jokes about giant cell-phones and Reagan-era material excesses in bunches.