Hiroshi Tsukuba is Kamen Rider, a cyborg. He fights to defend mankind from the nefarious secret organization Neo-Shocker!
Opening Narration. 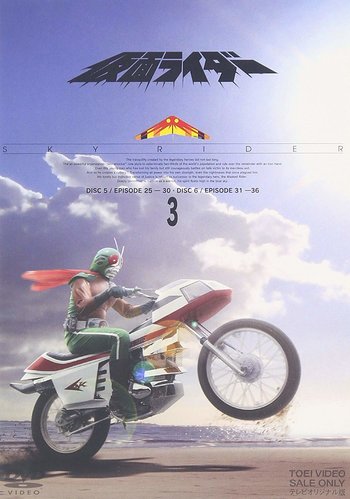 Kamen Rider (also known as Kamen Rider: Skyrider and New Kamen Rider) is the sixth program in the Kamen Rider franchise, airing from 1979 to 1980.

While on a camping trip, aerial photographer and hangliding enthusiast Hiroshi Tsukuba rescues Professor Keitaro Shido, who was a prisoner of Neo Shocker, a new version of the old Shocker group. Recaptured after Tsukuba helps him, Professor Shido tricks Neo Shocker into experimenting on Tsukuba, claiming that he will turn Tsukuba into a mighty warrior of evil.

Professor Shido's plan changes Tsukuba into a Kamen Rider, who manages to use his powers to escape and destroy the group who changed him. His father, a prominent scientist, and his mother are kidnapped and kept as slaves, as he attempts to rescue them and tries to have a normal life.

Produced four years after the end of Kamen Rider Stronger, the show was originally just titled Kamen Rider and intended to be a Continuity Reboot for the franchise. When this idea fell through, fans took to calling it New Kamen Rider (and later Skyrider) in order to distinguish it from the original. Similarly, the hero himself was just called "Kamen Rider" until Shigeru Jou gave him the sobriquet "Skyrider" in Episode 21. Skyrider would then team up with all his predecessors in the film tie-in Eight Riders vs. GingaOh.note "Galaxy King"