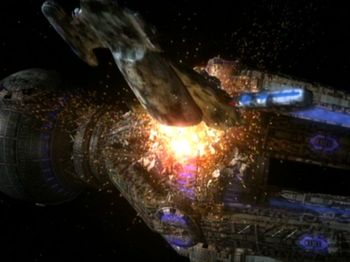 In science fiction, even if a ship has shields that can shrug off atomic weapons, ramming it with another ship always manages to take it down.

This is, in fact, pretty credible. The impact of a heavy freight train going 60 mph is equal to that of 1 to 2 tons of TNT — it's just over a much smaller area, and going in one direction. Most spaceships are far heavier, and can go far faster. An object traveling at 3 km/sec does damage equal to its own weight in TNTnote Among hard SF enthusiasts, this is known as Rick Robinson's Law of Space Combat. An object impacting at 6 km/sec would do damage equal to 4 times its weight in TNT, and would be said to do "4 Ricks" worth of damage.; a spaceship traveling at 94% of the speed of light does damage equal to its own weight in antimatter. And that's not even taking into account the ramming ship detonating its reactors and munitions when it hits.

In fact, the usual mistake is not to make ramming work too well but to make it work not well enough. Survivors are not unknown, and the effect is usually depicted as "Ship A crashes into ship B and ship B crumples and breaks apart in slow motion," where it should look like, and is only rarely is portrayed as, "Ship A crashes into ship B and both ships are vaporized in a titanic fireball". Likewise, small fighter craft often smash into bigger ships with no visible effect, when they ought to be wreaking massive devastation.

And then there's the momentum, even ramming at a few tens of meters per second could create enough force for the people inside to slam into the walls at dangerous if not lethal speed. Though interestingly when one of the ships weighs a lot more than the other the people in the bigger ship might only be knocked off their feet, so for a bigger ship ramming into a much smaller one at 10-30 m/s could be a great tactic for taking out enemy crews while leaving both ships intact...

That said, there is one challenge for a ramming ship, which is reaching the target in the first place. At realistic space combat distances (hundreds if not thousands of kilometers), the target should have plenty of time to see the attempt coming and either blow up the ramming ship or dodge out of its way. This ought to lead to a tense cat-and-mouse game as the rammer tries to close the distance and compensate for the target's evasive maneuvers, and the target tries to stay clear long enough to score a killing hit — the ramming ship is essentially a large missile, and the target would be performing a High-Speed Missile Dodge. Sadly, things are never portrayed like this.

The reason for this, of course, is that space ramming depictions are probably based on the Space Is an Ocean mindset, and the cultural memory of Real Life naval tactics of the ancient world. Before the advent of cannons, ramming the other ships was the main method for taking them out (other than burning or boarding). Note that this is where the term "ramming speed" comes from — the horator would begin beating the drums faster so the rovers at the oars of the galleys rowed faster in order to drive the ram deep into the side of the enemy ship. Ramming tactics made a brief comeback in the latter half of the nineteenth century, with steamships, when they started making ships out of metal instead of wood which made older cannons obsolete. Even then, battleships continued to be built with bows designed for ramming for many years after the tactic ceased to be relevant. In fact, in the early years of ironclad battleships, their armor was so effective against the relatively primitive guns of the era that ramming was seen as the only viable tactic against an ironclad. Even past this point, many ships have done a LOT of damage to each other with accidental or deliberate ramming, in particular sinking a large number of surfaced submarines.

Compare Colony Drop, which, depending on what you're dropping, takes this trope to its logical extreme. When combined with the Drop Pod you get the Boarding Pod, which rams a target not to destroy it but to inject heavily-armed troops into it. Although ramming is not unknown in combat

between large, heavy, main battle tanks, for land vehicles, see Car Fu or Forklift Fu. In sci-fi terms, a Sister Trope to Kinetic Weapons Are Just Better. Needless to say this trope is more effective with a Battering Ram.