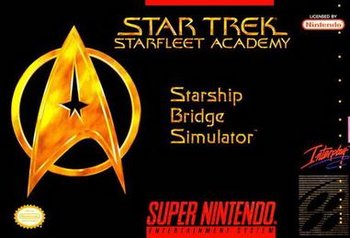 There have been two games bearing the name Star Trek: Starfleet Academy, both by Interplay Entertainment. The first game was released in 1994 for the Super Nintendo Entertainment System and the Sega 32X. On the former system it was moderately well received and quite a technologically advanced game for the SNES, while the Sega 32X version was a bit less well-regarded due to some control issues, and being a slightly less impressive title by the standards of that system. Neither version set the world alight in terms of sales however, and the console version was soon forgotten.

The second and more renowned version was released for the PC in 1997. This game, released at the dawn of the 3D Acceleration era, featured much improved graphics and far better space battles. Moreover, it included live action cutscenes with several Star Trek actors (including William Shatner, George Takei and Walter Koenig) playing their characters. There were a lot of similarities between this game and its console forerunner (the character names were mostly the same, for instance), though it was quite different structurally. An expansion pack, Chekov's Lost Missions, was released the following year.

The PC game had a spiritual successor, Star Trek: Klingon Academy, released in 2000. Interplay were apparently planning a true sequel which would have taken place during the era of Star Trek: The Next Generation, though they lost their Star Trek licence before they could do any serious work on the game.

These Video Games provide examples of: