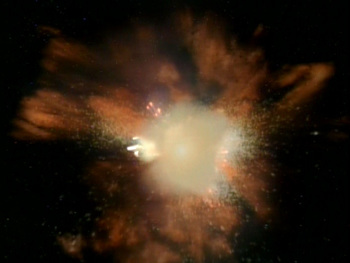 That was a Galaxy-class starship.
Jake is working on a science project about plants and what kinds of water yield the best results. Sisko wants him to think of something more challenging. After nixing Jake's first suggestion of learning to pilot a runabout, they settle on conducting a planetary survey in the Gamma Quadrant. Sisko's plan of some father-son bonding on the trip is ruined when Jake invites Nog along, as the young Ferengi needs a good grade. Meanwhile, Quark learns that the senior staff has rejected his proposal for advertising, so, he invites himself along on the trip hoping to butter up Sisko along the way.
Advertisement:

The group arrives at an uninhabited planet and the boys get to work. Quark is miserable in the wilderness and makes a nuisance of himself, provoking a confrontation between him and Sisko. Nog runs off in reaction to the squabbling, and Jake goes after him. Before Sisko and Quark can come to blows, an alien woman stumbles out of the forest. She says she's running from the Jem'Hadar, who then appear out of thin air and take the three captive. The kids return to find their guardians gone and decide to follow the footprints.

Sisko and Quark find themselves locked in a forcefield cell with the woman, who introduces herself as Eris and fills them in on the Jem'Hadar: They're the feared soldiers of the Dominion. Her homeworld was offered membership, but when they refused, the Dominion sent in the Jem'Hadar to quickly conquere them. Despite this, Sisko begins working on an escape plan. Eris has psionic powers she can use to blast out the forcefield, but they are being suppressed with a collar she's wearing. One of the Jem'Hadar finally comes to speak with Sisko and is blunt: the Dominion will no longer tolerate Starfleet boldly going through their territory.

Meanwhile, Jake and Nog manage to locate the cave where their family members are under guard. They beam up to the runabout to try and get help, but unfortunately they don't know how to disengage the autopilot or the access code to set a new course. They begin ripping things out of the craft but must ultimately try their hand at manually piloting the craft out of orbit.

The Jem'Hadar show up that the station and inform the senior staff that Sisko is being detained for questioning. He delivers a list of ships that have been destroyed for violating Dominion space. Kira is shocked to learn that a Bajoran colony in the Gamma Quadrant was also completely wiped out. Shortly afterwards, the USS Odyssey arrives, a Galaxy-class starship helmed by Captain Keogh, and they begin planning a rescue mission. The Odyssey and two runabouts piloted by Kira, Odo, Bashir, Dax and O'Brien all head into the Gamma Quadrant.

Jake and Nog pilot their partially deactivated ship out of orbit, though not without difficulty. Luckily, the rescue party arrives, and O'Brien beams over to help fix the shuttle. Meanwhile, Quark removes Eris' collar, and the captives make their escape. In space, three Jem'Hadar attack fighters engage the rescue ships. The Dominion's weapons effortlessly pass through the Starfleet shields, and the Odyssey is severely damaged.

In the midst of the fighting, O'Brien transports the captives off the planet. Now that they have what they came for, the rescue ships beat a hasty retreat for the Wormhole, but one of the fighters makes a kamikaze run on on the Odyssey and destroys it. Back in the Alpha Quadrant, Quark realizes that Eris' collar has nothing in it but a locking mechanism, meaning Eris could have escaped at any time but did not. That means that the whole captivity scenario was a plot by the Dominion to plant Eris into the Federation as a spy. Eris doesn't trouble to deny it and beams herself away. Sisko grimly notes that Deep Space Nine will be on the front line if war breaks out with the Dominion. He resolves to be ready.