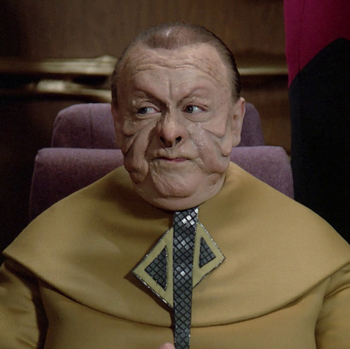 And then there's THIS asshole.
The Enterprise has agreed to take part in a training exercise using the run-down USS Hathaway as its opponent. Joining the crew to oversee the exercise is a supposed strategic mastermind named Kolrami (Roy Brocksmith). Worf calls that reputation into question pretty fast, pointing out that because Kolrami’s race is seen as a race of brilliant strategists, no one ever dares fight them, which means they might be terrible at it for all anyone knows. Kolrami outlines the plan: Riker will take command of the Hathaway, and he will have forty-eight hours to prepare it before the exercise begins. Each ship’s weapons systems will be temporarily disconnected and replaced with harmless lasers, which the computers will read as damage, shutting down systems that would be affected by a real attack. Picard and Riker both state that they have reservations about the exercise, since Starfleet is meant to explore, not fight, but they concede that with the Borg threat hanging over them it is wise to have options.

Picard gives Riker the freedom to choose anyone for his crew save for Lieutenant Commander Data, and he chooses, among others, Worf, Geordi, and Wesley. Kolrami is perpetually condescending toward Riker, which irritates the other bridge crew. Riker decides to earn Kolrami's respect by challenging him to a game of Strategema, of which Kolrami is a 3rd degree grandmaster. The game involves controlling dots on a grid via sensors on your fingers in an effort to capture the entire board. Riker does not expect to win and simply wants a challenge, but Kolrami crushes him embarrassingly.

In preperation for the exercise, Riker and his team beam over to the Hathaway and begin fixing her up, but they don’t have much to work with. Geordi looks over the engines and deems the ship incapable of warp drive, since even if he got it running, he doesn’t have any antimatter to fuel it with. Wesley is dejected and believes they're simply being set up to fail, but Riker insists that the test is about being innovative. Suddenly Wesley says he needs to return to the Enterprise, because he left an experiment running and needs to shut it down. Picard allows it, on the condition that he be escorted and not allowed to do anything but shut down the experiment. Wesley announces that his experiment is busted and needs to be transported outside of the ship to dispose of safely. Geordi is surprised to see the experiment materialize right in the Hathaway's engine room. With that, the Hathaway will have warp drive after all... for two seconds, at warp 1. It’s not much, but Riker thinks it may be useful as a surprise tactic.

Pulaski has decided that Kolrami needs to be brought down a peg and twists Data's arm into challenging him at Strategema. The crew eagerly gather to watch their comrade best the cocky tactical expert, but it takes Kolrami only a little while longer to defeat Data than it did Riker. The crew, and Data himself, are stunned. The android reasons that if a humanoid could defeat his computer brain, then he must be a malfunctioning. He withdraws from bridge duty until he can locate the error. Even after Troi and Pulaski assure him that he's fine, he remains absent from duty.

Kolrami continues talking smack about Riker, until Picard pulls him aside and asks what his problem is. Kolrami says that Riker could never be a good leader because he doesn’t take things seriously. Picard insists that Riker’s jovial attitude is how he gains loyalty from his men. Picard then confronts Data and tells him that yes, he might make mistakes, and even if he doesn’t, he might still lose, but this doesn’t mean he’s malfunctioning. It's just a part of life. Data takes his words to heart and returns to his post.

The battle begins. Worf uses his security knowledge of the Enterprise's computer to hack into it and make it see a Romulan warbird. As Picard struggles to address the threat, the Hathaway attacks. Picard orders a counterattack while Riker prepares to make his warp jump. But at that moment, a Ferengi ship appears, and this one isn’t Worf’s doing. With weapons offline, both ships are at the Ferengi’s mercy. Kolrami immediately tells Picard to abandon the Hathaway to save the majority of the crew, but Picard is unwilling to do so. He hails the Ferengi, who want to know why two Federation ships were fighting each other. They assume the Hathaway has something valuable aboard.

Picard and Riker cook up a plan and put it into action. Picard announces that he'll destroy the Hathaway rather than let it fall into enemy hands. The Enterprise fires a proton torpedo at the Hathaway, which uses its warp drive at just the right time to make it look like it was destroyed. Next, Worf fools the Ferengi’s sensors into seeing another fake ship. The Ferengis flee, seeing no further profit in fighting. Humiliated to have been proven wrong, Kolrami is forced to concede that Riker did admirably well and promises to write a glowing report.

But the crew are not finished dunking on Kolrami. Data challenges Kolrami to another Stratagema rematch. Instead of trying to win, he purposely keeps the game going for so long that Kolrami eventually loses patience and quits. So the moral of the story: always look for a third option.