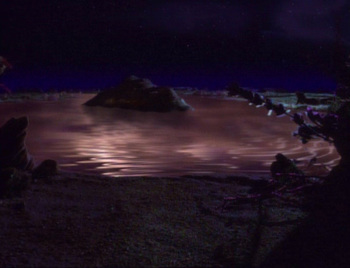 The crew of DS9 eagerly await Commander Sisko's return from Earth while discussing the threat of the Dominion when they get a sudden surprise: a Federation starship decloaking just off the station! Sisko reveals that this is his baby: the USS Defiant, a prototype of what is officially dubbed an "escort", but is essentially a weapons platform with warp engines. He had designed it to fight the Borg, but it was overpowered and unreliable, and mothballed when the Borg threat became less urgent. With the new threat of the Dominion, however, he's had it commissioned, and instructs Chief O'Brien to help work out the kinks. Its cloaking device is on loan from the Romulans, who have agreed to its use only in the Gamma Quadrant (aside from the stunt arriving at the station) in exchange for all intelligence they gather on the Dominion. And their first mission is to track down the homeworld of the Dominion's mysterious Founders.

Joining the crew for this mission are Subcommander T'Rul, the Romulan representative who will be responsible for the cloak, and Lt. Commander Michael Eddington, a new Starfleet security officer. Odo chafes at the idea of having Starfleet oversight on his job, and prepares to resign. Kira meets with Odo in private and tells him the Bajoran government has requested his presence on the mission, a claim Odo doesn't exactly believe, but Kira convinces him to participate anyway, since this would be a good opportunity to see if they can find more clues about his people. In the meantime, Sisko orders Quark to join the mission as well at the request of Grand Nagus Zek, due to Quark's experience negotiating with members of the Dominion. As the ship prepares to leave, Odo arrives to join up, but is less than thrilled to be stuck sharing quarters with Quark.

The Defiant apparently succeeds in eluding an anti-proton scan from a Jem'Hadar warship, and proceeds to the Karemma homeworld, where Quark makes inquiries about the Founders. The Karemman minister reveals that all contact with Dominion leadership is handled through a race called the Vorta, and he's reluctant to help them further. Sisko points out that not helping them could threaten the Karemma's trade alliance with the Ferengi, which could potentially upset the Founders, so the minister directs them to an unmanned relay station in the Callinon system. While studying the star chart, Odo is drawn to the Omarion Nebula, which is somehow familiar to him. Having fulfilled his duty to Sisko, Quark opts to stay behind to continue trade relations with the Karemma.

The Defiant reaches the relay station, but the crew finds it's a trap; Dax and O'Brien are stranded, and the ship is forced to evade the Jem'Hadar again, barely escaping. Odo in the meanwhile confesses his need to seek out the Omarion Nebula, but for the moment the mission comes first. The ship comes under fire as the Jem'Hadar have penetrated the cloak, and the Defiant is battered and boarded. Kira is knocked out, but Odo is able to rescue her and escape in a shuttlepod. When she comes to, she is chagrined to find that Odo is heading to the nebula instead of the wormhole, but it's too late to complain. Inside the nebula, they land on a rogue planet mostly covered by a familiar-looking fluid. Several humanoid forms who take on an appearance similar to Odo's emerge from the amber ocean; one of these Changelings, taking a female shape, addresses Odo: