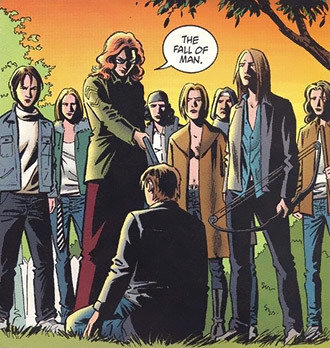 Hawkgirl: It's like some sort of plague, and half the city's got it.
Batman: Yes, the male half.
— Justice League, "Fury"
Advertisement:

A Depopulation Bomb variant that removes approximately half of the population of the world in one stroke, namely one complete gender. In many stories, there is one survivor of the lost gender — the protagonist, love interest, or MacGuffin of the story.

If it is the males who die off (as is most frequently the case), the story will be about how the surviving women rebuild society, or how Fish out of Water males cope with a society that has already been rebuilt. If it is the latter, the Last Man on Earth, our protagonist, may initially think that his life is going to be all orgies and pampering from now on. This is classic Genre Blindness, as stories of this type almost never fit this pattern. The last man will quickly become a target, sought by every woman of power and means in the world, as his sperm may be the key to the survival of the human race.

This type of story exists for several reasons. Primarily it's to explore gender politics and behavior, but they also have the secondary benefit of providing an excuse to write literature in which most of the principal characters are female (a major change from a lot of fiction). In addition, classic gender roles, the glass ceiling and biology being what they are, the death of all men would effectively decapitate most of the world's organizational structure, meaning descent into chaos is likely, especially in stories set before 1970. This collapse (and probable renewal) of society provides an excellent source of conflict for writers to build their plot around. Finally there's Rule 34: being one of the few males alive (fertile or not) gives our protagonist the chance to seduce every woman he sees, which is a popular trope on the horny side of the Web.

Some hard-line feminist authors might create this kind of story as a utopian vision, in line with their view that men are the root cause of all the ills of society. Some anti-feminist authors might create exactly the same kind of story to produce a dystopia, to show that women, or just feminists, are the cause of all the ills of society. Still others take the stance that humans are the cause of most human problems, and that if men aren't calling the shots, women will still make the same short-sighted and foolish decisions (at best, all new short-sighted and foolish decisions). The total collapse of society in these cases is not because of some inherent flaw in female leadership, but because three-and-a-half billion people just died all at once, with all the problems that causes. Either way, the dirty secret of these stories is that they're usually there to impart some political message, sometimes subtle and unobjectionable, sometimes not.

When all the women die off, in a usually unintentional double standard twist, the story is usually less about politics or gender issues and more about The End of the World as We Know It. These stories almost always take place After the End, in either a cruel dystopia or a chaotic Scavenger World. Either way, the clear implication is usually that without the "calming presence" of women, the men will immediately nuke themselves to hell out of sexual frustration and other "manly" demands. Such a setting is of course highly prone to feature brutal male-on-male rape to add to the Nightmare Fuel, or for other reasons. Note this can happen with the women-left scenario, but much less often and with the rape part nonexistent. The sexist nature of the situation is more complicated still if the men are "fighting over" the remaining women (in which case, there's at least a reason for conflict).

It is worth mentioning that a society with a lone survivor of one gender (or a pool smaller than a couple hundred of each) would be doomed to extinction (unless the remaining women make use of the stored sperm in sperm banks). There's wouldn't be the genetic diversity required to survive for more than a handful of generations (and that's once you get over the Squick factor of having to know exactly how related you are before you reproduce). Scenarios that result in a single gender and try to introduce some form of "human parthenogenesis" would succumb to extinction even faster without some kind of applied phlebotinum.

The name is a pun on genocide, and was first used by Mary Anne Warren in her 1985 book, Gendercide: The Implications of Sex Selection.

See also Gender Rarity Value and Childless Dystopia, both of which this trope is a prime setup for. If all of the members of a gender dies off, it may result in a One-Gender Race. Compare Sterility Plague, which can enable similar kinds of plots.